When you boil it all down, Laser Tag is a game where at least two players move around an arena and tag each other with beams of light. 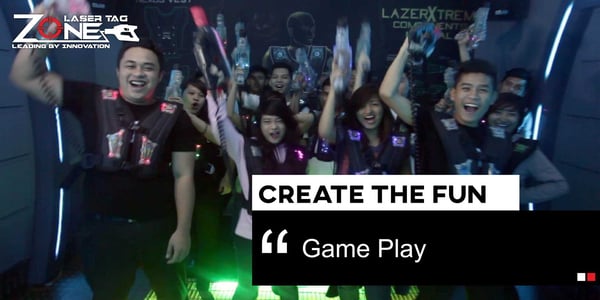 The game is generally played with bases, each team competing against the other for the most points. However, Laser Tag can be much more. Specialty games such as Zombies, Capture-the-flag, and different exciting variants exist, and your customers will love them.

We will now jump into a few of the most common game formats seen across our stores.

With Solo and Team formats making up well over half of all games played, why do you need more? Because today's customers expect more! Players today want each experience to be unique and memorable; they won't be happy to return to play the same game repeatedly. You need to access the depth and variety that your Laser Tag system can provide to ensure your centre's long-term success.

To make each experience unique and memorable, you want to offer exciting game formats, so once your customers have had their fill of the stranded games, they can delve deeper. Games like Zombies (a struggle for survival between humans and, you guessed it, Zombies) where opposing sides have to deplete the other's health. When a human's health has been sapped away, they must join with the zombies and start taking out their former allies. Humans only have limited ammo, so a strategy is needed for them to have any chance at victory!

Another excellent game format to spice up the fun is Domination. This classic battle for superiority is ideal for competitive teams. Opposing teams tag targets and bases to claim them for their side. While claimed by a team, they glow their color and accrues their points. The highest point total at the end of the round wins. Players must work together, spread out, and capture as many points earning devices (and hold them!) as they can.

Games like this add a whole new element to the laser tag experience, allowing customers to keep coming back and trying new games. Discover some of our more than 50 game formats here

Another key to making laser tag games suit the modern player is to bring in elements from video games that they will love, and that drive repeat play. Think features like achievements, custom names, and xp/level-ups. Success is reliant on repeat business, and membership software that personalizes the customer's experience can bring these video game features to bear.

Further, there are other outstanding features from video games that you can integrate into Laser Tag with the right software; think special weapons, player upgrades like shields, in-game messages, and heads-up displays. All Zone Systems come with large detailed screens that tell players what they need to know as they play.

Designing an Experience : The Design

This includes the design of the Laser Tag Arena, where a lot of the secrets for success with laser...

The game's length and how many are played per hour will vary from centre to centre. There is no...

Create the Fun: Briefing your guests

You're going to need to show your players how to play! Laser tag is different from other...