There’s a lot of buzz in the industry today about VR and what it offers, where the future might be and, among some, whether VR could unseat laser tag in popularity. VR is really cool and exciting, but I will flat out state that VR will not replace laser tag. It’s just not going to happen that way, certainly not within the next 7-10 years. Before you dismiss what I’m saying, let me prove my point by talking about the money involved, the type of play and other factors (such as augmented reality) that affect the profit reality in today’s amusement business. For those who don’t know us that well,

Zone is relatively different from most laser tag manufacturers in that we own multiple locations. I personally operate a laser tag arena, too. So we’re nose-to-the-grindstone kind of folks because we’re making money day-byday on customers coming in and enjoying a great laser tag experience. We want to pay attention to anything that’s a threat to that business model. Our interest in the future is multiplied two or threefold because we manufacture equipment. We must pay attention to anything that affects that side of the business…which leads us to VR. 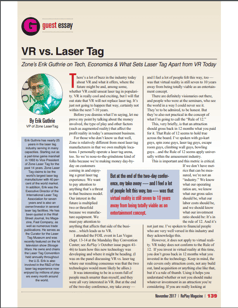 Are You Your Own Customer?

When was the last time you played laser tag in your arena? How often do you play? When did you hold...

What sets high-earning laser tags apart from all the others and why are some bowling centers doing...

The Sanctity of the Game

An operator should have a belief system in place when it comes to running laser tag, an attraction...