The Sanctity of the Game

An operator should have a belief system in place when it comes to running laser tag, an attraction that’s unique among others in the amusement industry. Consider this: Laser tag is the one attraction that can house many people and in which they all interact with each other. Since this interaction actually determines the enjoyment value of each game played, an operator should protect the sanctity of the game, meaning that nothing should interfere with the game once it starts.

Avoiding game interference seems straightforward enough, and yet I see it all the time. This interference comes in many forms. It might be that an arena device or target isn’t working right…or that a player’s vest or phaser isn’t performing as it should and has to be swapped out…or it might be that a guest is late to the laser tag party and gets to enter the game once it’s already started.

Let’s start with this last, late arrival problem. I can’t think of a single attraction in the amusement industry that would hold up the rest of the guests’ enjoyment for the sake of one late arriver. For example, have you ever seen a go-kart track operator start the cars racing and then stop them and make them all come back in while they add another kid to a cart? I’m sure not. Have you ever seen attendees stop a roller coaster so someone can get on halfway through? Of course not. 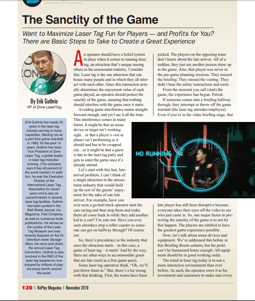 Throughout the Southern U.S. older laser tag arenas languish. Visitation has dropped off, with...

Are you leaving money on the Table? Part 1

I travel extensively and just got back from a tour of 26 locations in four days, most of them...