What sets high-earning laser tags apart from all the others and why are some bowling centers doing $800,000 or $1 million in laser tag sales while others are only doing $150,000? After 35 years, it’s clear that the laser tag industry has hit a maturation stage. It’s become synonymous with FECs. There are a variety of arenabuilding/theming companies, as well as a good number of laser tag manufacturers. In fact, at the European Amusement Show last year in Amsterdam, I personally visited at least a dozen laser tag equipment makers; at IAAPA last November, there were at least 10, both indoor and outdoor.

Competition We’re definitely in a mature, crowded market. In most cities now, you’re going to have a bowling center that’s adding laser tag competing with a trampoline facility two miles away that’s going to add it and two or three miles away from that, will be a roller skating rink that’s putting in laser tag as well. I’m really not exaggerating. 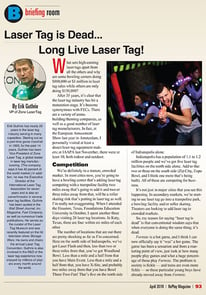 Read The Full Exert in its original format here

The Laser Tag Museum was proud to celebrate March 28, 2020 as the seventh annual International...