Throughout the Southern U.S. older laser tag arenas languish. Visitation has dropped off, with patrons defecting to newer FECs. Facilities are showing their age; longtime owners may be ready to retire. That’s where Zone Laser Tag USA comes in. Over the past four years, the Indiana-based entertainment group has bought nine aging properties and restored them to profitability. “There’s a business plan for starting, but when owners lose their zest, there often isn’t a planned exit strategy,” said Erik Guthrie, who is one third of the Zone team, along with Simon Willetts and Jeremy Gabby. “We look at underutilized properties. We’re looking to acquire rebounding locations, where the owners want to retire or otherwise move on.”

Since launching in 2015, the trio has acquired 10 locations: one each in Indiana, South Carolina, Ohio, and Florida, two in Maryland and four in Virginia. The men will only consider locations within six to eight hours’ drive for one of them; Guthrie is based in Indianapolis; Willetts in Delaware; and Gabby in Florida). “We’re not looking to overextend our credit capabilities,” noted Guthrie. “We’re concentrating along the I-95 corridor, and between I-55 and I-75.” One location has since closed due to underperformance, but the rest have thrived. Recently, the group acquired a pair of trampoline parks — the first acquisition outside laser tag. 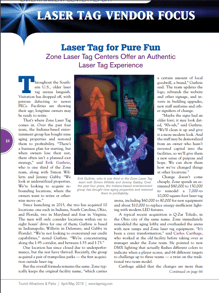 Erik Guthrie has nearly 25 years in the laser tag industry serving in many capacities. Starting out as a part-time game marshall in 1993, for the past 14 years, Guthrie has been Vice President of Zone Laser Tag, a global leader in laser tag manufacturing, he was the Executive Director of the International Laser Tag Association for seven years and is also an owner/investor in several laser tag facilities.

Nearly 50% of all laser tag attractions built each year select Zone Laser Tag. Zone is the best choice for your future in family entertainment.

So, why are so many locations selecting Zone Laser Tag? It’s because we design products that are robust, lightweight, and fun to play for all ages. We understand that if you’re not pulling triggers, you’re not counting cash.